This painting is one of thirty nine works in the Art Collection by Willie Rodger. It was acquired for the Collection in 2007 with assistance from the National Fund for Acquisitions.  In 2008 a major exhibition of the works of Willie Rodger and his family was held at the University.  In the exhibition catalogue Tessa Jackson writes that ‘his work attracts by its quirky humour, but much of it contains a layering of deep concern for the seriousness of life’ and this piece typifies very well those qualities. 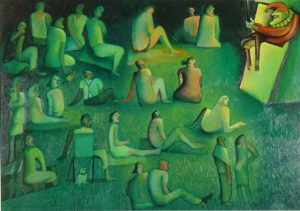 Willie’s art works are frequently on display in the Pathfoot Building where they are loved and admired by staff, students and visitors alike. The Art Collection commissioned a short film Corridor of Dreams which contains an interview with Willie in his studio. The film celebrates works of Art from the collection through the eyes of people who pass them on a daily basis.

Willie Rodger studied at Glasgow School of Art then taught art in schools for many years, all the while painting and printmaking. Since leaving teaching in 1976 he has exhibited widely. He was the first printmaker to be awarded Associate of the Royal Scottish Academy in 1989, of the Royal Glasgow Institute in 1994 and was awarded an honorary doctorate by the University of Stirling in 1999. Today he holds a reputation as Scotland’s master printmaker as well as being an accomplished painter and designer of stained glass windows.