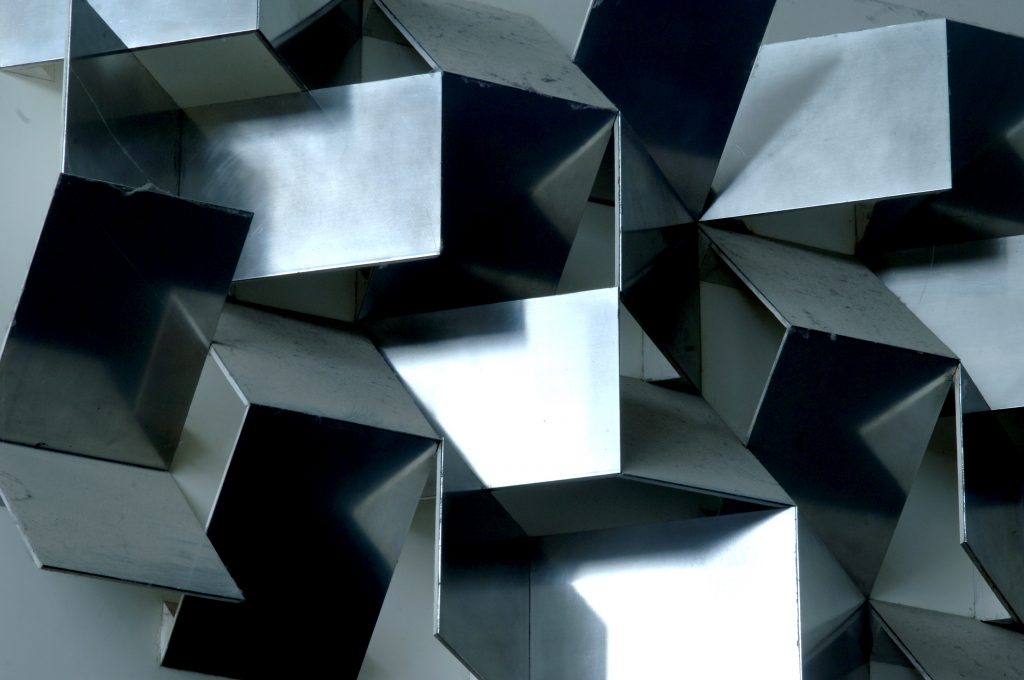 Born in Folkestone, Mary Martin studied at Goldsmiths’ College and the Royal College of Art. Mural was commissioned by the University Art Committee for the new Pathfoot building canteen as a site specific sculpture. It is typical of her work, in that movement is implied both in a system of positive and negative spaces, and also in the play of light over mirrored surfaces.
There were several positive national reviews of this work at the time. For instance this one, which was broadcast on the BBC Third Programme on Christmas Eve 1969:

‘[Mary Martin] had in mind the great length of the construction, 48 feet, and wanted to give full play to the movement of the viewer along its length and all the reflections of light, colour and movement that it takes from its surroundings…the work is brought alive by a gentle unobtrusive rhythm along its whole length. When you approach it from a distance, it is the reflections that strike you first. Each sideways-facing plane catches the reflection of the white edge of the upward or downward-facing plane beside it, and often of the one beyond as well. Then when you get closer, and look sideways down its length, you see the long sweeping sequences of parallel planes determined by the rhythmic order of the rows…. Well, it will be obvious by now that I think the Mary Martin mural is an authentic work of art of a high order.’
Mural turned out to be Mary Martin’s last public commission and she sadly died before it was installed. It can now be seen in the Pathfoot Crush Hall.