On the evening of Sunday 3rd September 1995 the University of Stirling experienced a taste of Hollywood glitz and glamour with the Macrobert hosting the European premiere of Braveheart, the historical epic about the Scottish hero William Wallace. The film’s star Mel Gibson was among many of the cast who attended the screening which took place in the shadow of the Wallace Monument. Such was the interest in the film that it was simultaneously screened in the Logie Lecture Theatre for university staff and students.

Brig, the student newspaper, reported on the event with the front page headline ‘Stirling savours premiere.’ The screening suffered a slight hiccup with Brig reporting that:

Just as the English Cavalry were about to commence battle with the Scots the 20th Century Fox projector broke down, plunging the audience into darkness. However during the ten minute setback Mel Gibson proved himself a star as he broke the awkward silence, getting up from his seat, dancing a quick Highland fling and asking ‘Does anyone know any good jokes?’

Such was the enthusiasm for the film that Brig went on to report that:

It was after the screening that Stirling outshone Hollywood even more as thousands lined the route from the University to the Castle to cheer the 700 guests on their way to the after-show party under a shower of fireworks.

The film went on to have a huge impact on Scottish culture and politics. The ‘Braveheart phenomenon’ is documented in a number of our collections, with the coverage of the premiere and the impact on the film on the local tourist economy being recorded in a file of press cuttings in the University Archives (ref. UA/A/6/8/1). Braveheart’s impact on the Scottish film industry is recorded in our Scottish Screen press cuttings collection, while its influence on the political debate in Scotland can be examined in our Scottish Political Archive. 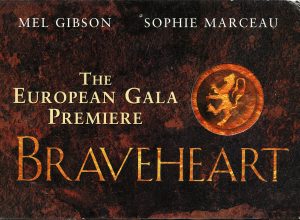