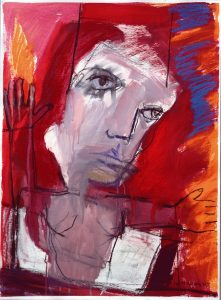 Other Directions (Oil and pastel on paper, 2007)
Lys Hansen has had an association with the University of Stirling and its Art Collection since 1968 but she came to prominence as a dynamic and challenging expressionist figurative painter in the early 1980s before the emergence of the New Glasgow Boys: Howson, Campbell, Currie and Wisniewski. In 1985 a major scholarship from the Scottish Arts Council afforded her the time and opportunity to work in Berlin, which had a profound effect and she has recently also worked in Denmark, Ireland and France.

The University Art Collection held a major exhibition of Lys’s work in 2009 entitled ‘Relatively Closer’. Lys Hansen’s main concerns are the human condition and the complex inter-relationships of people, and this work is typical of this. Her wish is to lead the viewer through catharsis or empathy to resolve the emotions encountered.