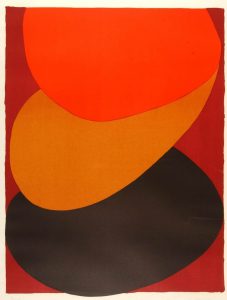 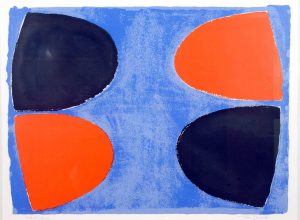 Born in Leamington Spa, Terry Frost did not become an artist until he was in his 30s. During the Second World War he met and was encouraged by Adrian Heath while a prisoner of war. Subsequently, he attended Camberwell School of Art where he was taught by Victor Pasmore.

In 1950 he moved to St Ives and the colours and shapes of life on the coast became a major inspiration for his abstractions, in which he appreciated the opportunity to invent, reacting to his own emotional response to a scene, rather than trying to depict it literally.

In 1951 he worked as an assistant to the sculptor Barbara Hepworth and his career included teaching at the Bath Academy of Art, serving as Gregory Fellow at the University of Leeds, and teaching at the Cyprus College of Art. Later he became the artist in residence and Professor of Painting at the Department of Fine Art of the University of Reading. In 1992, Terry Frost was elected a Royal Academician and he was knighted in 1998

Black and Red on Blue is currently on display in the Realising the Vision exhibition at the Macrobert Arts Centre at the University.