#25 Robert Leighton and his books

The Leighton Library in Dunblane is founded on the personal library of Archbishop Robert Leighton (1611-1684). Robert Leighton lived through one of the most turbulent periods in Scottish history. He was ordained as a Presbyterian minister, yet took up the office of Bishop of Dunblane in the restored Episcopal Church, in an attempt to reconcile Presbyterians and Episcopalians in a united Church of Scotland. Aware that he might be accused of seeking self-aggrandisement, he accepted a post in Dunblane, the smallest and poorest see in the country. He was later installed as Archbishop of Glasgow, though he failed to bring about the reconciliation in church affairs which he so desired. 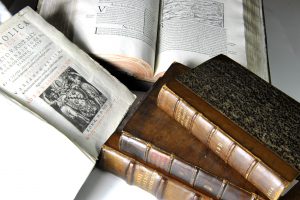 Leighton was a learned scholar, with wide ranging interests. He bequeathed some 1500 books and pamphlets to the Cathedral of Dunblane. A library building was erected between 1684 and 1688 in order to house the books for the use of the local clergy. From 1734 the library became one of the first subscription libraries in Scotland and thrived until around 1870. Leighton’s collection of books was supplemented by 18th and 19th century additions. The collection covers a variety of subject areas, including history and politics (particularly 17th century), theology, medicine, travel, language and the occult. There is also much to interest the book historian. The Leighton Library is owned and administered by the Leighton Library Trust. Thanks to an agreement with the Trust, developed in the 1970s, books from the Leighton Library may be consulted in the University Library. The first online catalogue of the Leighton Library was produced by the University in the 1980s. Today, items from this remarkable collection can be viewed in our archives reading room by prior appointment. 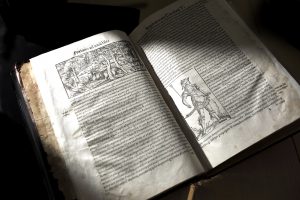