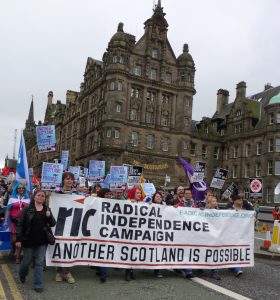 In 2012 and 2013 pro-independence campaigners descended on Edinburgh to undertake a ‘March
for Independence’.  The second March and Rally for Scottish Independence was held on the 21st September 2013. Supporters of a yes vote in the 2014 referendum rallied in the High Street on the Royal Mile in Edinburgh for midday and then marched to Calton Hill via North Bridge and Princes Street. At Calton Hill they held a rally where they were addressed by speakers such as Alex Salmond,Nicola Sturgeon, Dennis Canavan, Alan Grogan, Blair Jenkins, Hardeep Singh Koli and Elaine C. Smith.
Three years today on September 18th 2014 voters were asked Should Scotland be an independent country? The result of this referendum was 55% said No (2,001,926 votes) and 45% said Yes (1,617,989 votes).
The Political Archive holds campaign literature, banners, photographs publications and ephemera collected from yes and no groups during the course of the referendum.