#8 The Menace of Separation- The 1979 Referendum 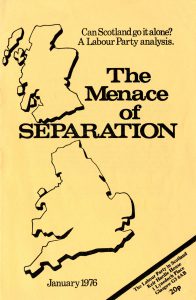 This ten page pamphlet “The Menace of Separation” was issued by the Scottish Labour Party in January 1976 and discusses the implications of full independence for Scotland. The pamphlet states “Labour believes that independence is full of dangerous assumptions, that the separatists appeal to oil revenues as the source of future prosperity is a simplistic approach”.

Scotland’s first devolution referendum was held on March 1st 1979. Voters were asked “Do you want the provisions of the Scotland Act of 1978 to be put into effect?” Although voters were being asked if they wanted a devolved Scottish Assembly, this was not a simple Yes/No referendum; but one subject to a 40% rule. Opponents of devolution at Westminster amended the legislation on the Scotland Assembly so that 40% of the registered electorate had to vote Yes in the referendum.

The 1979 referendum campaign was characterised by a lack of unity between political parties and the Yes and No campaigners themselves. Voters were confronted with a range of campaign groups and conflicting messages. The Labour Party were officially campaigning for yes, but as the leaflets here show there were many in the party who were campaigning for a no vote. 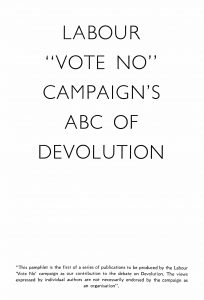 The devolution referendum took place on March 1st 1979. Results were announced the following day and this is where the 40% rule became critical. 51.6% of votes cast were for the Yes side, but this only represented 32.9% of the total electorate.  Yes campaigners had failed to meet the magic 40% threshold needed to put the Scotland Act into effect. In fact none of the 12 counting areas met the 40% rule, with Central Region being the closest with 36.4%.

The Scottish Political Archive hold a large collection of material relating to the 1979 and 1997 devolution referendums.  This includes an oral history collection of interviews with key campaigners in these referendums.