Scotland hosted the Commonwealth Games for the first time in July 1970. The Scottish team consisted of 148 athletes who competed across athletics, badminton, bowls, boxing, cycling, fencing, swimming and diving, weightlifting and wrestling. The team won a total of 25 medals including 6 golds. The Commonwealth Games Scotland Archive preserves a comprehensive record of the event including minutes, reports, correspondence, photographs and promotional material. 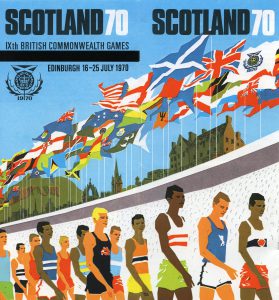 This colourful, striking image was designed as the cover for a promotional booklet for the event. Over 40 years later we returned to this depiction of sporting brotherhood, selecting it as the key image for our touring Hosts & Champions exhibition. Our display of material from the Commonwealth Games Scotland Archive has visited ten towns across Scotland, travelling hundreds of miles, being seen by thousands of people.

Our experiences on the road with Hosts & Champions have highlighted the value of sporting heritage. On Friday 24 February 2017 we are organising a conference bringing together experts in the curation, care, use and promotion of sporting heritage to discuss their work and provide details of current projects. The full programme for the event is available here.