#28 The Ettrick Shepherd comes to Stirling 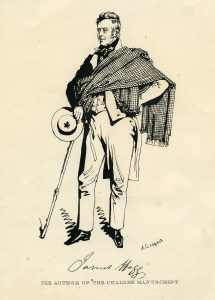 James Hogg (1770-1835) was a shepherd, but battled against a childhood of poverty in the Scottish Borders and a lack of formal education to become ‘the Ettrick Shepherd’, one of the most prolific Scottish writers of the nineteenth century. Today he is best known for his novel The Private Memoirs and Confessions of a Justified Sinner (1824), but he also produced other novels, volumes of poetry, stories, and essays.

The University Library has a good collection of Hogg-related books and manuscripts, many of which were donated to the Library by the New Zealand based descendants of James Hogg. Professor Douglas Mack, Hogg researcher and one of the first librarians at Stirling, was instrumental in bringing the collection to Stirling in the 1970s and 1980s.

The collection contains many interesting insights into the life of James Hogg as farmer and husband, as well as writer. Highlights include the poet’s journal of a tour to the Western Highlands and Hebrides in 1803, correspondence with Margaret Phillips (later Hogg) during their courtship and marriage and the surviving household and farm accounts for the period 1818-1835.

This summer the university’s Pathfoot building hosts a major new exhibition on Hogg’s life and work to coincide with the biennial international James Hogg Society Conference, which takes place from 19-21 July.