#29 Come Together: Famous members of the Musicians’ Union

The Musicians’ Union Archive features a veritable treasure trove of artefacts from the Union’s 124 year history. As well as providing an invaluable overview from the organisation’s early days as the Amalgamated Musicians’ Union, right through to the present day, the archive also features first-hand accounts written during some of the most important historical events of the 20th century. For example, Scottish Organiser J.S. Ratcliffe’s ‘Dispatches from the Front, 1916’ imparted a very personal perspective of what it was like for musicians serving in World War 1.

Among the articles contained within the archives are membership records for some of the regional branches, such as Liverpool (ref. MU/04/05/04) and Manchester (ref. MU/04/01/04), cities which are both famed for their rich musical heritage. There’s a paradigm shift in the instruments played by new members in the 1960s from predominantly orchestral instruments to the rise of the ‘beat groups’. Guitarists become much more prevalent and it becomes commonplace to see guitarists, bassists and drummers signing up at the same time. It doesn’t take long to find some fairly familiar names:

John Lennon was a member of the Musicians’ Union right up until he moved to New York, a point noted in his obituary in the Union’s ‘Musician’ magazine (ref. MU/01/05): 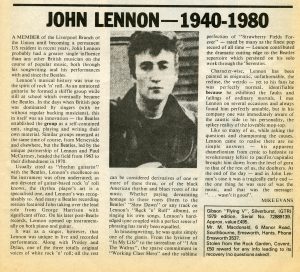 In amongst the membership records, there is an address book (ref. MU/04/05/04/05/02) for the Liverpool branch, which tells us where a certain J.P. McCartney was living when he joined the Musicians’ Union:

Paul McCartney was listed as living at 20 Forthlin Road in Liverpool , which is well known as his childhood home and is now a National Trust property!

In addition to The Beatles, other famous members in the Manchester and Liverpool membership records, to name but a few, include Pete Burns from Dead or Alive, Ian Broudie from Big In Japan and the Lightning Seeds, Ian McCulloch from Echo and the Bunnymen and Ian Curtis from Joy Division, who signed up on the same day as current BBC Radio 6 Music DJ Marc Riley:

The likes of Burns, Broudie, McCulloch and Curtis all joined the Union at the same time as many of their fellow band-mates, a number of whom went on to have illustrious careers themselves.