#41 Katie Paterson. Ideas (Gravity released one unit at a time) 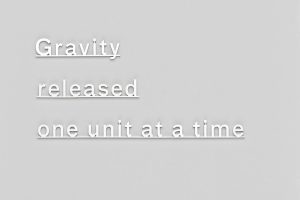 Born in Glasgow, Katie Paterson is a successful artist who lives and works in Scotland and Berlin. Since graduating from the Slade School of Art in 2007 Katie Paterson has gone on to exhibit internationally, from London to New York, Berlin to Seoul, and her works have been exhibited in major shows worldwide.

In the summer of 2014, the Ingleby Gallery presented Katie Paterson: Ideas as part of the GENERATION nationwide programme of exhibitions, Paterson’s largest solo exhibition to date.  This work Ideas (Gravity released one unit at a time) is one of a series of text works to exist in the imagination.  Ideas are a series of short haiku-like sentences in solid silver that turn some of Katie Paterson’s unrealisable ideas into impossible statements of intent. These semi-poetic phrases take shape in the imagination of whoever reads the words and so become an expression of the idea itself. What gradually becomes clear is that the distance between the realised and the unrealisable is not to be relied upon.

This work was purchased in 2016 by the Art Collection with support from the National Fund for Acquisitions.