Submission to the University Grants Committee for the Establishment of a University in and adjacent to the Royal Burgh of Stirling, 1964 (ref. UA/C/12/1/3) 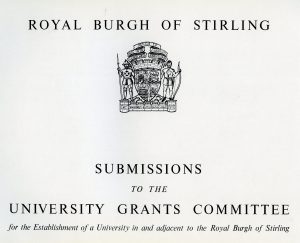 In 1963 the blueprint for the expansion and development of university education in the UK was laid out in the Robbins Report. As a result of its recommendations the government announced in January 1964 that a new university should be established in Scotland. This twelve page illustrated brochure made the case for Stirling as the site of the new university.

Produced by Stirling Town Council it set out the economic and geographical advantages of Stirling, “the heart and hub of Scotland.” The location of the new university was also suggested the document proposing “an excellent site eminently suitable for a new University at Airthrey Estate.” Stirling’s long-held desire to have a university was also noted, the Town Council making previous requests for the establishment of a new third-level institution in the burgh in 1946 and 1960.

The choice of the location of the new Scottish University was to be made by the University Grants Committee. In April and May 1964 it visited the seven towns which had formally expressed an interest: Dumfries, Ayr, Cumbernauld, Falkirk, Inverness, Perth and Stirling.

The visits strengthened the view of the committee that for reasons of geography and population the most suitable locations were those in Central Scotland. The committee had been impressed with the possibilities offered by Airthrey Estate (and the potential use of Stirling Castle for official ceremonies). Stirling’s excellent transport links, plentiful accommodation for staff and students, and close proximity to industry made it the unanimous choice of the committee – much to the surprise of the press who had considered Inverness and Falkirk the favourites to be chosen.