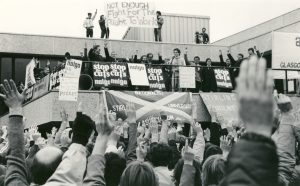 Jack McConnell addresses a Right to Work Rally at Stirling University, 1980.  The picture show Lord McConnell addressing the crowd from the roof of the Robbins Building at Queens Court at the University. At this time he was President of the Stirling University Students Association. Also present in the picture are Dennis Canavan and George Robertson whose collections are also held in the Scottish Political Archive. 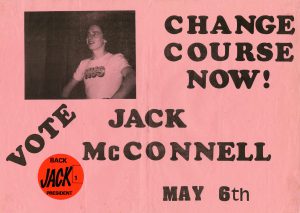 Lord McConnell is a graduate of the University of Stirling where he served as President of Stirling University Students Association between 1980 -82 as well as Vice-President of NUS Scotland in 1982-83. He graduated in 1983 and took up a post teaching maths in Lornshill Academy in Alloa. Between 1984 and 1993 he served as a Labour Councillor for Logie Ward on Stirling Council.  His collection incorporates papers relating to this period which are particularly relevant from a Stirling perspective. In addition it directly ties into the Stirling University institutional collecting policy by including material relating to the history of the University Students’ Association and Stirling Council.

Throughout the 1980s Lord McConnell was involved in the Labour Co-ordinating Committee (Scotland) as well as a founder member of Scottish Labour Action: each was responsible for developing Labour policy in Scotland. He was appointed General Secretary of the Scottish Labour Party in 1992, a position he held until 1998, during which time he was a key member of the Scottish Constitutional Convention which designed the devolution settlement for the Scottish Parliament.  Between 1999 and 2011 he was returned as the Labour MSP for Motherwell and Wishaw, successively holding the positions of Minister for Finance (1999-2000), Minister for Education, Europe and External Affairs (2000-2001) before becoming First Minister (2001-2007). Lord McConnell was at the heart of Labour policy decision making throughout this period and his papers reflect this involvement.

The archive is held within the Scottish Political Archive and due to be released in stages from 2017.  As part of the University’s 50th anniversary events Lord McConnell will be speaking at the Challenges of Our Time lecture and there will be an opportunity to view items from the archive.  This event is free but places must be booked in advance  http://www.stir.ac.uk/events/calendarofevents/2017/september/challengesofourtimeclimatechangegreatesthumanrightschallengeofourtimes/